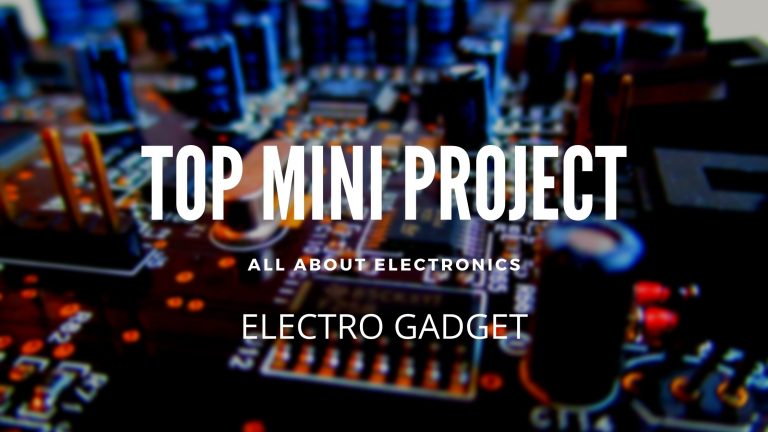 We would like to provide you with a huge list of Electronics Mini Project ideas for your engineering project work, along with the components list, circuit diagram, code, working principle, and applications. This list has a combination of our own making DIY projects and a few other projects done by some other websites.

A WiFi Smart Plug is like a power-point adapter. It fits between your power socket and the appliance you wish to plug in. Most of the smart plugs communicate (any Wi-Fi network) to a central control hub. Then, the hub uses your Wi-Fi to send information to an app on your smartphone.

A stun gun is a device used to generate a high voltage and low current signal. It is mostly used as a weapon to stun or shock waves to the target. The shock of it gets weak or paralyses the target. For its application, some countries banned this stun gun. This is actually a weapon that can paralyze a person mentally.

Today’s project is about PWM Motor Speed Controller using just 555 timer IC. It is useful for varying the speed of a low-powered DC motor. There are many circuits on the web that can control DC motors for electronic project purposes. But when it comes to controlling the motor uniformly and smoothly, the PWM motor speed controller is the best option like using AVR, 8051 and Arduino.

By going to shrinkify Arduino projects are not possible sometimes according to their sizes. Even Arduino Nano also failed. Then comes a little chip to fulfil our expectation i.e. ATtiny85 Microcontroller. It works like a normal Arduino without any crystal oscillator or anything.

In this tutorial, we will be going to learn how to build a simple 12V to 220V 35W inverter circuit. Inverters are often needed at places where load shedding is a common problem. There are two types of inverters, sine wave inverter which is very expensive, and modified inverters which price are inexpensive.

A voltage doubler circuit is an electronic circuit that charges capacitors through input voltage and switches these charges twice the voltage produced at the output as at its input.

The concept of the WiFi Controlled Robot Car is so simple. The ESP8266 NodeMCU Module works as a network hub for connecting to the WiFi network and acting as a server. Coming to the client, a simple webpage is created and the browser which opens this web page acts as a client.

Today we are going to build a cool project that is a thunder and lightning effect using Arduino. Lightning is the most spectacular part of a thunderstorm. In fact, it is how thunderstorms got their name. The lightning causes the thunderstorm. A single stroke of lightning can increase the heat of the air to around 30,000°C that can expand fast the air. This expansion then creates a shockwave which turns into an explosive sound. That is called thunder.

Nowadays, watering crops are a normal problem in the agriculture field. It is happening because farmers lack ideas about the availability of technologies. They lose their precious time pumping water to spread the entire field until it gets properly watered. So we here designed an automatic plant irrigation system using 555 timer ic.

This mini project demonstrates a password-based door lock system wherein once the correct code or password is entered, the door is opened and the concerned person is allowed access to the secured area.

This project will show you an inverter-type Automatic Emergency Light with 12 watts LED panel. Load shedding is a common problem in today’s developing countries. By keeping the problem in mind, I will make a simple automatic emergency light that is operated through AC mains. It can also be operated through battery backup.

In this project, I will be going to show you a 1.2V to 12V variable auto-cut-off battery charger using a relay. When the battery level is below the maximum threshold voltage level, the charger starts to charge. When it gets its maximum voltage which is set, then the variable battery charger circuit will automatically cut the charging from the battery.

how to build a simple 12V to 220V 35W inverter circuit. Inverters are often needed at places where load shedding is a common problem. There are two types of inverters, sine wave inverter which is very expensive, and modified inverters which price are inexpensive.

An infrared proximity sensor by utilizing IC LM358 with a simple step-by-step process. The activity of this sensor is so basic when an object is before the sensor, the alarm or LED will glow up. We have two IR LEDs, a transmitter and a receiver.

This mini-project demonstrates a fire alarm circuit that detects nearby fire in a small radius and the sensor activates the op-amp LM358 to produce the output Sound through a buzzer.

An adjustable voltage power supply with LM317 regulator in which inputs AC supplies (220V-230V AC) and outputs DC voltage. It is commonly used for voltage regulation in today’s circuit industry. This IC has the ability to control over-voltage protection, internal current controlling, overload protection, and many more.

A simple Ultrasonic Sound Generator that can be used for various purposes such as a sound generator, mosquito repeller, and like this. This project uses an astable mode multivibrator with IC 555 which produces the desired frequency by altering the variable resistance.

The operation of this sensor is so simple when an object is in front of the sensor, the led will light up. We have two IR LEDs, a transmitter and a receiver. When the current passes through the transmitter led, it will emit IR rays.

We can use a burglar alarm system in residential buildings, commercial buildings, offices, industries, and military bases. In most cases, these security systems are too much costly but this inexpensive project can overcome such problems.

How To Make A Metal Detector Circuit

This mini-project demonstrates a simple metal detector circuit that is very useful for checking the person in shopping malls, hotels, and cinema halls to ensure that person is not carrying any explosive metals or illegal things like guns, bombs, etc.

This mini-project demonstrates a darkness detector that detects darkness using the cheapest light sensor that is LDR (Light Dependent Resistor). The darkness Detector circuit can helpful for use in applications where the light will be going off.

This mini-project demonstrates a low-power audio frequency amplifier that is helpful in a small audio amplifier project. The IC consumes very little power and a 9V battery can operate it easily. It can easily drive an 8 Ω speaker or two 4 Ω speakers.

I will show you a cheap class AB audio amplifier using a few components. If you need to build the amplifier circuit in your home. The TDA2030 Amplifier circuit is a nice choice. Because it’s miles a reasonably-priced IC and easy to use.

This mini-project demonstrates a cell phone detector that can detect the nearness of an active cell phone from a separate distance of four to five meters. So it can come helpful in an assessment lobby or gatherings.

Water tank flow is a typical issue that prompts the wastage of water. In spite of the fact that there are numerous answers for it like ball valves which consequently stop the water stream once the tank gets full.

This is very useful for home use because it alerts us whenever the rainwater falls on the two probes which will turn on and the buzzer will start to beep.

Doorbells are basic in each house. We, every day watch various sorts of doorbells accessible in the market and they produce various kinds of music relying upon their usefulness.

The main principle of the circuit is to switch on the fan connected to the DC motor when the temperature is greater than a threshold value. This can be used in home applications and in the CPU to reduce heat.

This mini-project demonstrates a simple and modest DC-to-DC boost converter circuit with 555 Timer IC. A boost converter is a DC to DC power converter that increases the voltage to a fixed certain level by getting a certain amount of specified input voltage.

The 555 Timer IC is one of the most popular and most frequently used integrated circuits in mini-project. It performs an array of timing tasks in the electronic circuits and there is a huge list of experiments which can be performed with 555 IC.