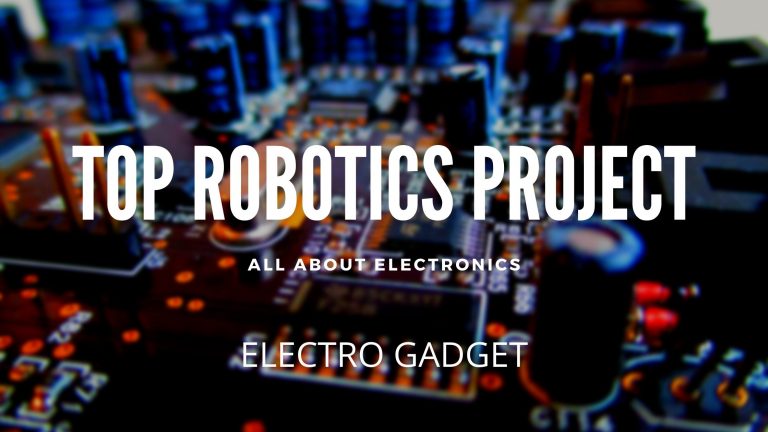 As a result, many people show a lot of interest in technology from engineering level. For this reason, here we are listing out some useful and top and simple robotics projects ideas for engineering students. These project ideas include some interesting concepts like a line follower robot, self balancing robot, fire fighting robot, mobile phone controlled robot, etc. So, if you are interested you may check this list of robotics projects ideas.

In this project, I have built a simple robot that can be controlled over a WiFi network. When the user inputs for the required direction of the movement of the Robot are provided through the WiFi.

Line follower robot is a self automation robotic technology that can detect a visual line on the floor. This is the line in which the robot can follow this and it should be a black line on a white surface (vice versa can be possible).

In this robotics project, we can learn the balancing concept and how to control the motors. Its working is very simple. Here we use the MPU6050 accelerometer which interfaces with Arduino and sends some analog signals to the Arduino which could be x-axis, y-axis, and z-axis.

I will be going to show you a Bluetooth controlled robot using an Arduino and HC-05 Bluetooth module. By utilizing this IoT project I will use a smartphone and an android app that can operate the robotic car.

Robotics is so much interesting and fast-growing field. In the field of engineering science, the applications of robotics projects are increasing with technology. There are many types of robotic technology like AI-based, self-controlling, and humanoid controlled. An Obstacle Avoiding Robot is a type of self-controlling autonomous robot that can avoid collisions with unexpected obstacles.

This robotics project represents an AI-based chatbot system for controlling home appliances using ESP8266-12E NodeMCU and Facebook Messenger platform. The platform for creating AI chatbot for Facebook is Chatfuel. The project also uses IFTTT and Adafruit IO for back-end support. The project is great for integrating AI with the Internet of Things (IoT).

This robot with a camera is placed in a remote location to capture the environment in visual form using Raspberry Pi. The captured visuals are displayed on the user’s virtual reality (VR) headset.

Many major accidents are averted by extinguishing fire at an early stage. The aim in this next project is to build a robot that can detect and extinguish fire. This fire extinguishing robot is a prototype of the actual one. Sensors used here are simple infrared (IR) photodiodes that detect IR rays coming out of the fire.

This robotics project explains designing a spy robot which can be controlled by the remote. The remote has four switches to control the robot in four directions. The robot senses the surroundings through the charge-coupled device (CCD) camera and sends to the receiver through the Radio Frequency (RF) wireless communication.