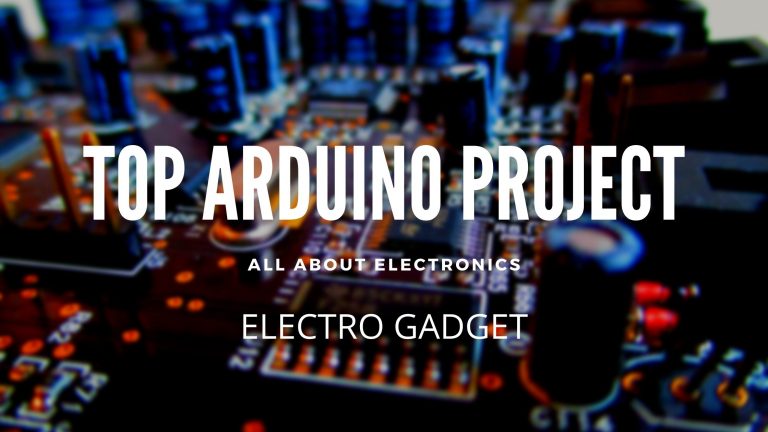 Welcome to my vast collection of Arduino Projects. If you are just getting started with Arduino, you don’t have to worry about that. Each of the following DIY Arduino projects is covered with detailed step by step tutorial on how to do it yourself and includes circuit schematics, source codes and videos.

Today we are going to build a cool project that is thunder and lightning effect using Arduino. Lightning is the most spectacular part of a thunderstorm. In fact, it is how thunderstorm got its name. The lightning causes the thunderstorm.

In this project, we are going to make a DIY Self Balancing Robot using Arduino. In this, we can learn the balancing concept and how to control the motors. Its working is very simple.

The IR proximity sensor module consists of an IR transmitter & receiver that can work a digital Tachometer for speed measurement of any rotating object. The digital tachometer is an RPM counter which counts the number of rotations per minute.

This project uses an HC-SR04 distance sensor and atmega328P or the other ATMEGA chip which is programmed using an Arduino programming kit, that the project is predicated on Arduino. But our final Circuit is a standalone circuit without the attached Arduino programmer.

In this tutorial, I will be going to show you a Bluetooth controlled robot using an Arduino and HC-05 Bluetooth module. By utilizing this IoT project I will use a smartphone and an android app that can operate the robotic car.

Capacitance Meter With LCD And Arduino

In this tutorial, I will show you Arduino based Capacitance Meter which can measure specific values of capacitors. A Capacitor is an electrical component that stores electric charge and this capacity of the capacitor to store the electric charge is known as its capacitance.

In this tutorial, I will tell you the best way to make an Arduino Wattmeter, a device that can be used to measure the power consumed by a load. With this project, this circuit can likewise go about as a Voltmeter and Ammeter to measure voltage and current.

When we talk about simple robotics technology that is operated through any kind of microcontroller, then a popular name is come out i.e. a Line Follower Robot. Line follower robot is a self automation robotic technology that can detect a visual line on the floor.

A simple project on Obstacle Avoiding Robot is designed here. Robotics is an interesting and fast-growing field. Being a branch of engineering, the applications of robotics are increasing with the advancement of technology.

The project is about how we can transform the complex signal into simple or primary signals. Here we are using audio signal and make them decomposed into signals of different frequencies. We are using the Fourier transform, which helps us to decompose the signal.

This is an Arduino project of a VFO (variable frequency oscillator) for use in homebrew equipment such as direct conversion and superheterodyne Receivers or Ham Transmitters can be used as RF/clock generator too.